Biography
A multidisciplinary artist, Stéphane Rousseau is recognized equally for his work as a comedian, performer, singer, illustrator, painter, creator and author; he is attracted by all the facets of his craft. Stéphane was initially discovered for his humour and characters portrayed on Quebec radio, but it was his one-man shows performed for more than 25 years across Québec, in France and French-speaking Europe which earned him numerous awards (at Quebec’s Gala de l’ADISQ and Gala Les Olivier) and made him a true celebrity. His excellence and versatility were also recognized by people in the film and television industry, leading Stéphane to appear in series, host talk shows, and act in several films, including Astérix aux Jeux Olympiques and Les Invasions Barbares (The Barbarian Invasions) (Oscar for the Best Foreign Language, César for best film, and Génie for best Canadian film), for which Stéphane won the Génie for best supporting actor.
Ever since he was very young and up until today, Stéphane draws constantly, every day, as soon as he wakes up. It is a visceral need. As a little boy, he was fascinated by mythological creatures which inspired him to create his own monsters, as he likes to call them. An admirer of the great masters such as Picasso (his favourite), Miró, Dalí, and Basquiat, Haring, Warhol and Banksy to name a few, Stéphane, who approaches his work joyfully but also very thoughtfully, uses the codes of surrealism and urban art to express the existential questions which preoccupy him.
In his drawing and acrylics on canvas and wood, Stéphane in fact delivers parts of himself, his fears and his misgivings. His phantasmagoric iconography brings to light his thoughts about life, sickness and death, love and sexuality, nature, travel and other human questions. Stéphane takes pleasure in opposing reality and fantasy, the conscious and the subconscious; a pleasure driven by his desire to create a balance between the harmony and tension which inhabits every human being.
Stéphane the stage artist brings his incredible versatility to his characters; Stéphane the painter brings his soul to his pictorial art, shamelessly and with the authenticity of the child who still inhabits his creative spirit. 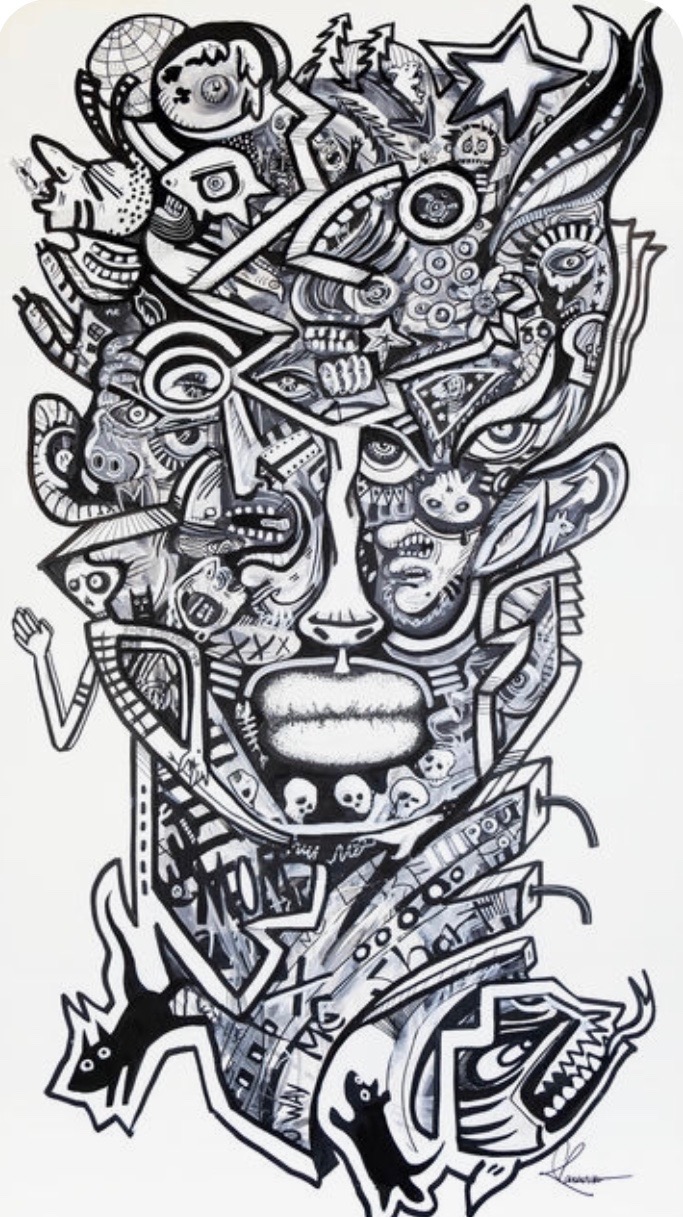